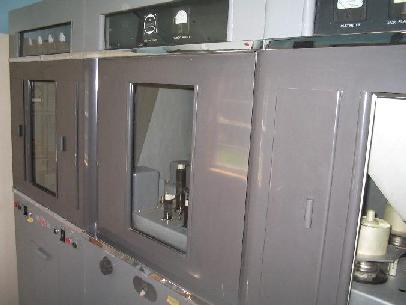 Oblique view of the Collins 21E transmitter, Serial No. 171. This transmitter came from WMTR in Morristown, New Jersey. It was still in use as an auxiliary transmitter until management decided to completely rebuild the transmitter plant in 2003 to accommodate a power increase. The transmitter has been completely reassembled at my location near Shickshinny, Pennsylvania. All of the electrical work has been completed, including the installation of three phase, closed delta service. The leftmost cubicle is the driver section. The center cubicle is the power supply for the PA and modulator stages. It takes a pair of 866A mercury vapor rectifier tubes as the bias rectifier and six 575A or 872A mercury vapor rectifiers for the three-phase high voltage supply. This cubicle also houses the modulation transformer. The cubicle on the right is the PA and modulator section. It also contains the modulation reactor. No modifications will be made, other than to reduce power to amateur power levels and to get the networks in the driver and PA cubicles to tune to the 160 meter band. 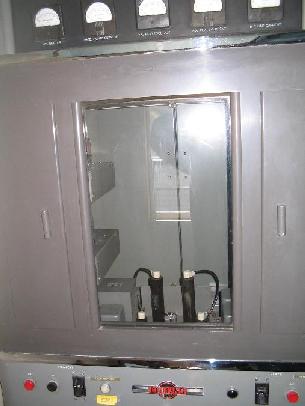 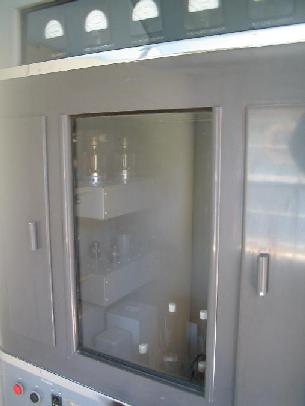 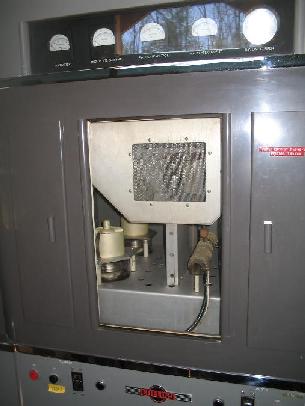 Front view of the PA compartment, showing the plate RF choke for the 3CX2500A PA tube and the two 3X3000A modulator tubes. The RF output network is inside the compartment with the screened window. 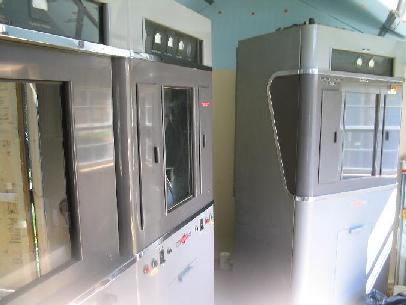 Another view of the transmitter shack, showing the 21E and an antenna phasing unit to the right. This was used at WMTR for phasing a two-tower array and it was custom-built into a Collins cabinet to match the 21E. It has a resistive load on the top, originally used for a pre-sunrise reduction of power when WMTR was a daytime-only station. This will be reworked and used as a backup dummy load for low power operation. I also have a high power dummy load which will be my station's main dummy load, allowing me to test the transmitter at high power. The antenna system is a folded unipole on a Rohn BX64 tower. Eventually, a second BX64 will be erected and the two unipoles will be phased for directional operation. The left meter on the phasor indicates the RF current going into the resistors. The right meter shows the common point current.